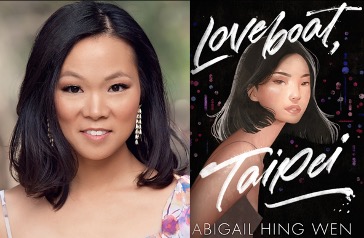 Join H4A for a virtual conversation with Abigail Hing Wen (AB '99), NY Times bestselling author and executive producer of Loveboat, Taipei. Abigail will share insights from her career and transition from venture capitalist to writer and media personality. This event was organized by Nina Tao (MBA '99) and Jenny Korn (MPP '98).

Abigail (AB ‘99) is the author of the New York Times best selling novel, Loveboat, Taipei and its sequel Loveboat Reunion. She is also the executive producer of the book-to-film adaptation (starring Ross Butler and Ashley Liao), and the Netflix franchise To All the Boys I’ve Loved Before. Prior to that, Abigail was a venture capitalist in Silicon Valley where she also hosted Intel's Artificial Intelligence podcast. he also serves with the Partnership on AI and is described by Forbes as “One of the most respected voices in fairness and AI” and by Pop Culturalist as “one of the voices of her generation.”